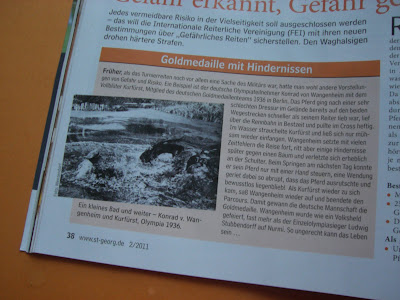 "Earlier, when competitions were military events, the perspective on danger and risk was somewhat different. An example is the German Olympian Konrad von Wangenheim and his Thoroughbred Kurfürst, who took part in the 1936 Olympics in Berlin.

After a very bad dressage program, the horse was almost uncontrollable in the first two parts of the cross-country, running faster than his rider wanted him to. In the last part the horse continued to pull, before he had a fall at a water complex. 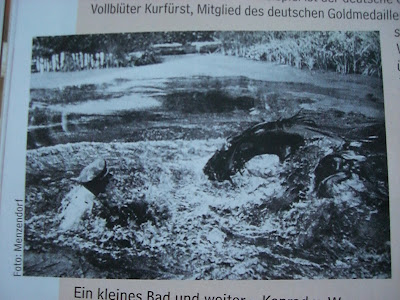 It took some time to catch the horse after the mishap, time faults accumulated, but the horse and rider combination continued their journey. A few obstacles later the rider hurt his shoulder as his horse ran into a tree. The next day in the show jumping the rider could only steer his horse with one hand. Because of this, one turn was very abrupt and the horse slid and fell, knocking himself unconscious in the process. After some time the horse woke up again, Wangenheim mounted his horse and finished the course.
Thereby the German team won the gold medal. Wangenheim was hailed a hero, almost more so than the individual gold medalist, Ludwig Stubbendorf on Nurmi. That's how unfair life can be..."