Back in business after a good 10 months break.... 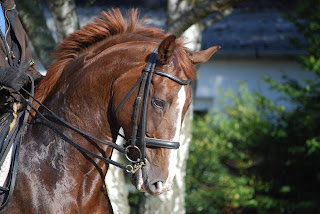 After Fontis death last year my amazingly supportive parents agreed to help me buy a new horse. The plan was to look for a young, inexpensive horse that I could develop with the help of my trainers. I went and looked at some youngsters, some a bit older, all of them nice horses but none of them "my" horse. At the same time I got the chance to ride a mare at my stable that had come from Frankfurt a few weeks earlier to be sold. She was already 11 years old, would do almost anything you asked of her but she had a few quite big gaps in her education - she would get stressed, get short in the neck and drop her back, trying to fulfill her riders wishes but not working correctly. She wasn't really what I was looking for, and she was too expensive. I liked her from the start. 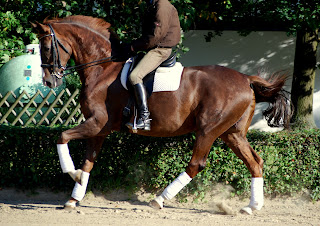 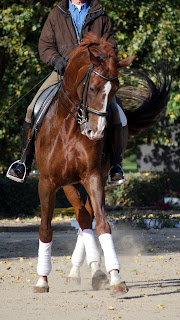 She was also carrying some holiday weight....The most impressive thing about Donna is her mentality. She's a real striver, she tries so hard to do everything right, even if her previous training has caused the already described basic faults. My plan was to take a few steps back, get her to loosen up and round her back with the help of lunging her (since she gets slightly stressed with a rider on her back) and put no pressure on her until she would be able to work in an anatomically correct and relaxed way.

She had already gone through a vet check in Frankfurt, but I had my vet look as her and the x-rays as well. And as is, unfortunately, too often the case, the seller's vet had failed to notice/ had left out that Donna also had OCD, or chips, in some joints. Long story short: The seller had the chips removed, Donna recovered well from the surgery and I bought her some time after that in the fall of 2011. After many weeks of walk and then some trot (and many pounds lost) Donna started to trot uneven. In Febuary this year, after different post-OP joint treatments, the diagnosis was found: As it turns out, she has a defect in her left hind suspensory ligament and needs roughly a year off. 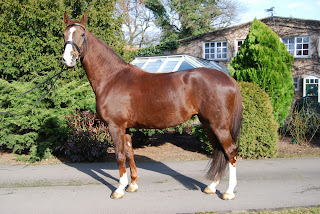 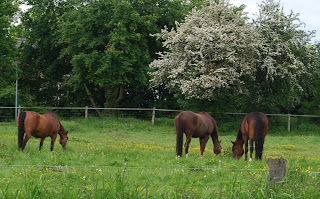 So here she is now, in the field with her mare companions. The huge disappointment of the injury did however open another door: breeding. Donna has a very good, interesting genetic background, with the dressage matador Donnerhall as a father and a Thouroghbred great-grandfather on the mothers side. Her breeder obviously also had a breeding career in mind for her as Donna as a 3-year-old completed her "Stutenleistungsprüfung" which got her registered in the Hanovarian mare book and so she's all set to become a mother of a registered Hanovarian foal!

The lucky, albeit unknowing, father is Londontime (-Londonderry-Walt Disney I-Trapper), a stallion bought by the Celle State Stud for a record 520.000 Euro at the Hanovarian auction in Verden in 2005. 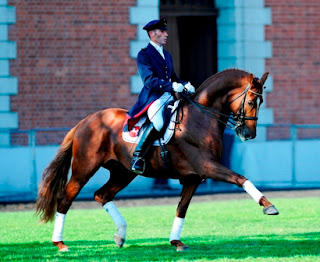 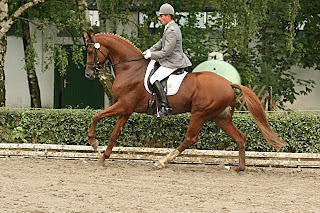 Photo: Schwöbel
(Londontime competing at Donnas former stable - little did we know then...!)

He hasn't been used that much as a stallion yet, as he didn't stand at stud some years but was educated in dressage instead. But I have seen some very good young horses, and from very different mothers, which is important to me as there's no way of knowing how Donna will influence her foal - if she gets pregnant that is! As of today she is not in foal, so we'll have to try again.

So that's where I'm at - fingers crossed the luck will turn and Donna will produce a lovely little foal next year!