(A word of warning for anyone reading: this post does sadly not have a happy ending) 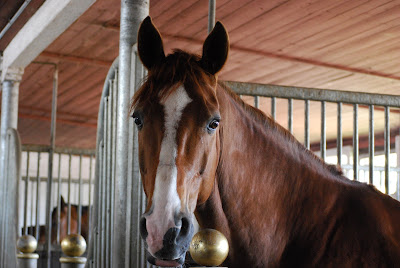 Wednesday last week I entered the stable and quickly realized that Fonti was ill again. After having had colic so many times in Febuary and March (and once again in May) we had run every test we could think of. First up was a gastroscopy to rule out an ulcer, and then everything from a normal blood workup and electrophoresis to a urinetest, stooltest and functiontest of the kidneys. Nothing provided an answer for the recurring colics.

The day after Fonti coliced in May he suddenly developed a serious fever, his temperature rising to 41 degrees Celcius or over 105 Fahrenheit. For 4-5 days the vet was there every day to give him Novalgin which caused his temperature to drop for about 8-12 hours before it stared rising again. After a short week of no fever it came back, and we had another 4-5 days of the same. The theory was that this was a virus and not connected to his other health problems. 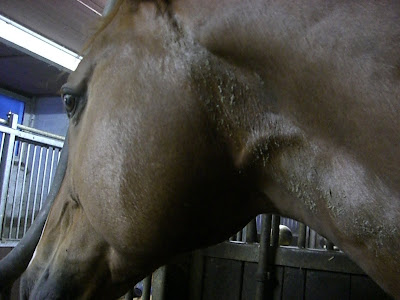 Once in a while, horses develop a jugular vein thrombosis or blood clot after having gotten drugs intravenously injected (and Fonti had gotten a lot). Physiologically the body will form a blood clot using platelets and fibrin to prevent blood loss when a blood vessel is injured. In Fontis case his body reacted quite heavily and through a later ultrasound of his vein it was assessed that the left vein was more that 90 % blocked from the clot which of course caused a problem with the blood flow. It was decieded to start him on a course of Phenprocoumon (Marcumar), an anticoagulant drug to try to reduce the clot. As it's imortant to give the exact right dosis and in the beginning take daily blood test to check the level of coagulant factors in the blood, Fonti spent 2 weeks in the equine clinic at my school. 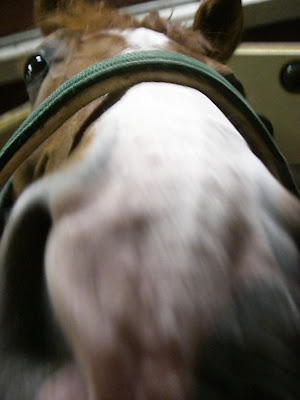 Last Saturday he could finally come home, with some restrictions: He should under no circumstances injure himself and only get some light training to keep him happy, since he was no longer allowed outside in his paddock with his buddy Flintstone (due to the risk of injury). 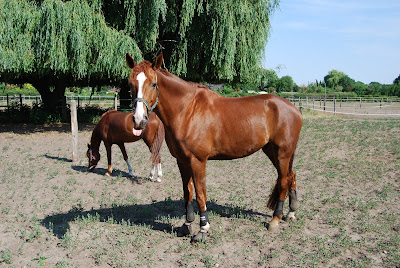 And then, 3 days later I found him in his box with the worst colic I've ever seen. Waiting for the vet we walked around outside. At first he walked willingly but as time by went he started breathing faster and faster and his pulse was up to over 70 beats /min (normally Fonti had about 35/min). He was sweating all over and once suddenly laid down and refused to get up. After some time he did get up again and the vet finally got there. All she could do was give him some painkillers and send us on our way to the equine clinic.

There they did a complete colic treatment and also ultrasounded his abdomen but with only some minor finds, nothing to explain the heavy pain. By then Fonti was also looking slightly better, his vitals had stabilized and he was no longer displaying signs of colic.

They wanted to keep him overnight and have him starve for 24 hours. 10 liters of water and oil through a stomach tube later and Fonti was back in a box for the night. 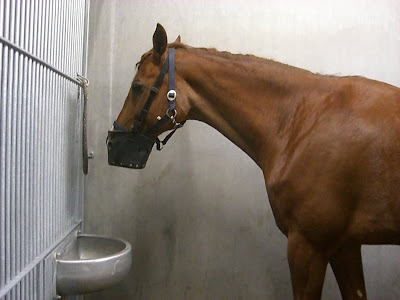 I went back to the clinic in the evening to visit. He felt cold all over and stood very still in one corner of his box but even so he looked a lot better than that same afternoon. Sick but no more colic attacs.
On Thursday morning I got a call from the vet. Fonti had been okay over night but now he had taken a turn for the worse. He had spiked a fever and after a new ultrasound they had discovered a large amount of fluid in his abdominal cavity. Should they do a needle expiration to see what it was? Yes.

After a few very long hours another call. More bad news - the fluid was almost pure pus, probably from an abscess somewhere in his abdomen that had ruptured. Most likely this had happened yesterday and the fever was a result of the bacteria infiltrating the blood stream causing sepsticemia or blood poisoning. Now came the time for a hard decision: the vets recommendation was to operate, to flush out the pus, find the location of the problem and hopefully repair it. And it would cost a lot of money.

After phoning home to my dad, who would have to pay, we decided to give it a try. There was still a chance to help Fonti, although the chance of complications was even higher than normal because of his bloodthinning medication. Even so, I wasn't ready to give up (and my parents kind enough to pay).
The vet promised to call from the OR as soon as they had assessed the situation and could give a more exact prognosis. So I tried to make time pass by calling different people and putting on a movie to try to distract me. Reading for my upcoming exam was out of the question.

Some hours later the vet called again. She was very sorry, but she had only bad news. The abscess was in the wall of the small intestine and had damaged this as well when it ruptured. In addition there were multiple adhesions (internal scar tissue that connect tissues not normally connected) between different sections of the intestines and a bad case of peritonitis.
Even with extensive surgery the chances of him ever becoming healty again were minimal. Slightly in schock I agreed with her that the best thing for Fonti was to not wake him up again.

Even though I thought I had prepared myself for something like this, at least after Wednesdays bad colic attac, it still feels unreal that I've lost my horse. I still walk into the stable with a part of me expecting him to stick his head out to greet me. The stable feels empty even though it's full of horses.
The last days have been filled with crying and coping, and it's going to take time. I'm grateful that I'm surrounded by great people who support me, at home and in the stable. I've gotten the opportunity to ride a schoolmaster some days of the week, for which I'm very thankful. I want to keep going.
At least we now know what was bothering him this whole time, and even if it's no direct comfort it at least a relief, after almost 7 months, to not having to always be frustrated because there's no diagnosis to be made. 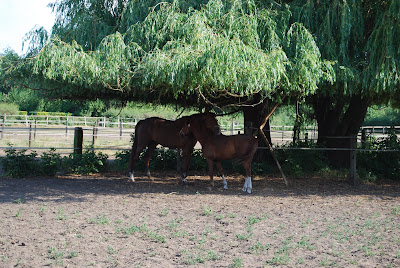 Last December Fonti and I took part in a small Christmas show at the stable. In the first clip we're just showing the different gaits (Fonti is the second horse entering at the start of the video) and in the second clip we're part of a quadrille (horse no 4).