To brand or not to brand...

Currently there's a huge debate going on in Germany, dividing riders, horse breeders and other horse people. The last couple of years some groups have begun to campaign against the tradition of branding foals. Recently it all came to a boiling point after this poster was published from a German animal protection organization. 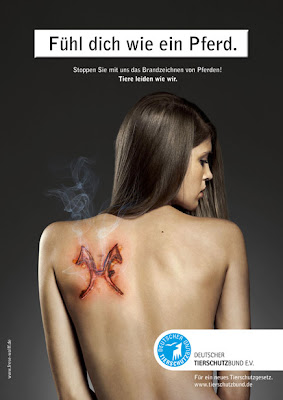 The brand is that of the Hannoveraner, one of the most recognized of the brands. The text over the girls head reads "feel like a horse". This poster is part of a larger campaign, another is this one against castration of piglets without anesthesia: 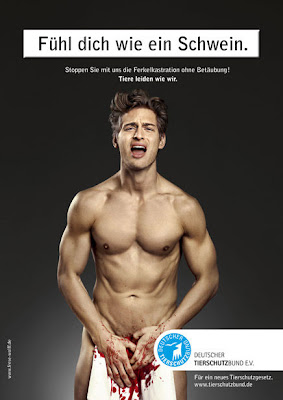 (More posters can be seen here).

The discussion regarding branding can be summed up as follows: the German government (more specifically the Agricultural Department), the national Veterinary Organisation (Bundesverband Praktizierender Tierärzte, BPT) and some/many riders want to ban the practice of branding. Some/many riders, the German federation, horse breeders (at least the ones that make themselves heard) and the breeding associations want to keep it.

There are 4 main points that are being discussed:
1) Most importantly, the pain caused (or supposed pain, to those who defend branding) to the horses
2) How to best identitfy horses
3) Marketing
4) Money

1) It seems strange that holding a scorching hot iron to a horse's skin wouldn't cause massive pain. But that is the argument from the breeders/breeding assoc. "If it hurts so bad, why don't the horses defend themselves, or run away?" Three of the major breeding assoc. (the Hannover, Holstein and Trakhener Assoc.) together with the German federation (FN) have made a film to demonstrate how well the foals tolerate the branding, and are also collecting signatures for a letter to the government to reconsider their position on branding. And indeed, the foals seem remarkably unfazed by it all. But how are they after a few hours, or days? Anyone who have ever burn themselves know that it doesn't start to really hurt before the skin starts reacting to the damage that has been done.

2) The reason this debate started was mainly because we now have an alternative to branding; microchips. Inserted into the neck, it's promoted as a pain-free, surefire way to identify horses. A few years back, I had my previous horse chipped, as did many others, and never heard anybody either complain or tell horror stories of what might go wrong. So I keep being surprised by all the things reported by many Germans to be wrong with microchipping. First of all, supposedly many (I haven't seen any numbers) horses develop abcesses where the chip is inserted, or the chip travels in the body of the horse and ends up somewhere else, causing problems or at least hindering it from being read by a scanner. Second, it not pain-free and third, the chips can only be read by special scanners that are not always at hand and differ from country to country, making it difficult to correctly identify horses that have travelled over borders. 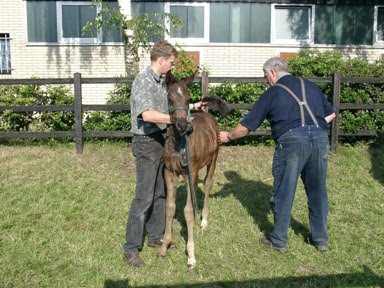 Picure from http://www.oldenburger-pferde.com/pferde/63_91.php
3) "Taking the brand away from the horse is like snapping the star off of the Mercedes cars." Sure, it's still a good car, but nobody's going to recognise it as a Mercedes. That's pretty much the argument from the marketing department. And I suspect, the real reason why the breeders are so reluctant to part with the hot iron.

4) Ever since the BPT revealed their support to the ban, it has been said that the ban is just a deal between the government and the vets to earn more money. (A vet has to chip the foal, whereas the branding is done by people from the different breeding assoc.)

My first instinct is to agree with the ban. Why cause unnessesary pain to animals? Even if horses don't experience pain the way humans do (as claimed in the film), I don't believe that it's possible to not experience some degree of pain from branding. These animals feel flies landing on their fur!

But it's interesting that generally speaking, the people most committed to defending the practice are those who have actually seen and experienced it (and also benefit from it for marketing reasons...), and those who despise it are people who usually haven't seen it first hand.

Right now, nobody knows how it'll end, but I have a feeling that the breeders are going to have to live with brand-free horses in the future.
Lagt inn av Anne i Hannover kl. 23:30