Today is "themeday" on 3sat, a public, advertising-free television network broadcasting mainly within Germany, Austria and Switzerland. The theme? Everything to do with horses! Since 05.00 this morning until tomorrow morning, only horsey programmes are shown (with small newsbreaks in between). I love living in a country that knows to appreciate horses (and the people who love them)!

It got me thinking about another "love Germany"-episode I had. One Saturday last year a busload of vet students went off on an excursion to different farms as part of our animal husbandry lectures. 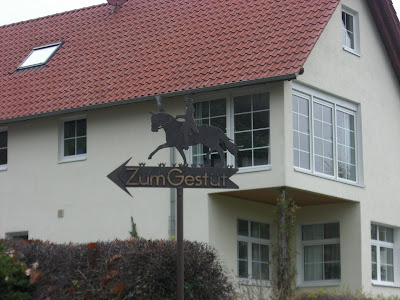 One of the stops was at a breeder of Trakheners, only a short hour from Hannover. The stable lay next to a great castle and pond; 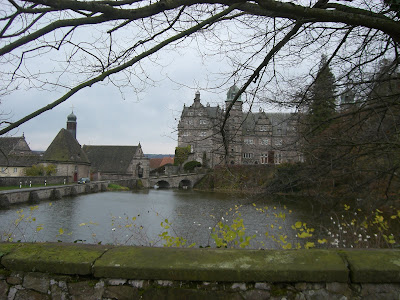 the stable itself wasn't that impressive, as far as I could see a standard, concrete thing. 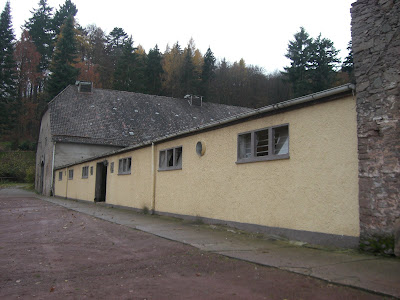 As is often the case with older stables here, often buildings that were not originally built as stables, is was pretty dark and with little fresh air, although the boxes were spacious. 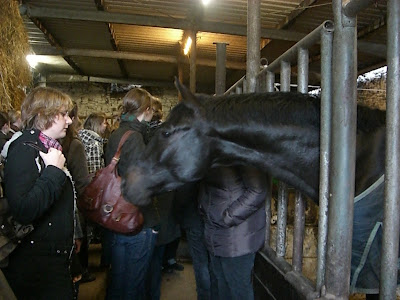 Honestly, I was only moderatly motivated; it was freezing, the old, nice man who showed us around was very difficult for a foreigner to understand and my mind was on other things. So I followed the group and looked politely at the many, many 1-,2- and 3-year-olds, beautiful horses all of them. 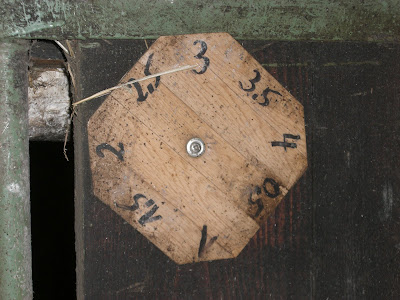 Cool stable detail: You could spin the plate thingy to show how many kg of hay/horse/meal. In this example, 3 kg per meal. 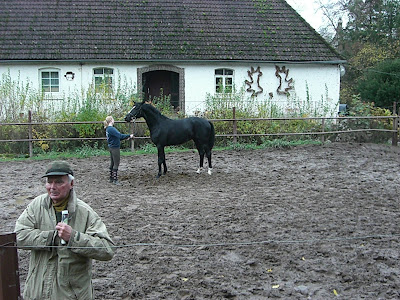 Then, the pride and joy of the stable was brought out. It took me a minute to catch the name of the horse (as I said, he wasn't easy to understand). It was Kostolany.
Now, for non-dressage enthusiasts/nerds, that might not say much, but on this freezing day, we got to see the probably most influencial Trakhener stallion of the past 20 years.
He is now enjoying his Lebensabend ("evening of his life" or last days) as the Germans so poetically calls it, at the breeding farm where he was born. 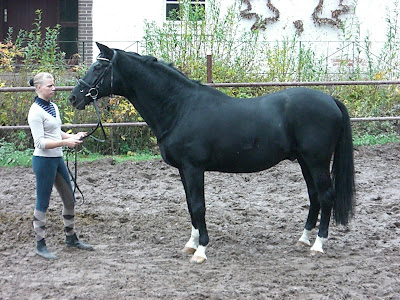 Kostolany is the father of 10 approved stallions. One of them was Gribaldi, who, before passing away last year, competed at Grand Prix-level with Edward Gal of the Netherlands. His most famous offspring is without a doubt Totilas, who under the same rider has become a dressage sensation. Another well-known son is Painted Black (Anky van Grunsven).

Another Kostolany-son is Silvermoon, father of Blue Hors Matiné, 3rd in the Kür at the World Championship in Aachen in 2006 with Andreas Helgstrand (Denmark). 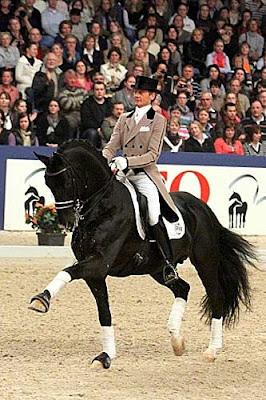 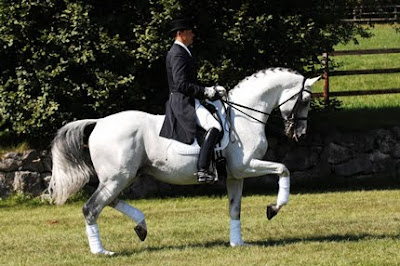 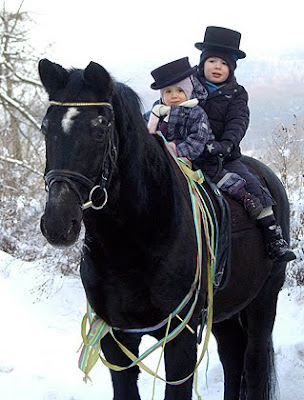 Kostolany at 26, nicely decorated with children and, eh, paper drapes or something...

The stallion and his old man: 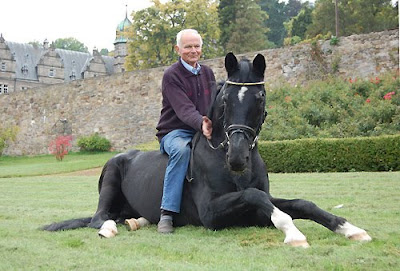 In 2009, Kostolany was named Trakhener Stallion of the Year. At all Trakhener events you'll be hard pressed to avoid horses with Kostolany somewhere in their breeding (not that you would want to). A recent example is All Inclusive (Gribaldi - Buddenbrock), the 2009 reserve champion of the Trakhener Körung. 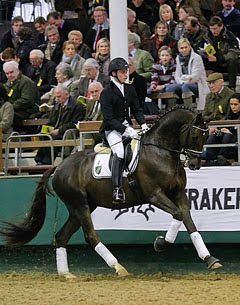 For those interested, there's lots more to read about the breeding farm, Kostolany and his many offspring and of course the other horses at the farm at Gestüt Hämelschenburg (in German and English).

I love the fact that you can find these outstanding horses just around the corner, that the horse is so rooted in the nations history and that working with or having horses isn't seen (only) as a "hobby for rich little girls" (as I sometimes get the feeling of at home). Look at the audience in the picture above - a mix of gender and generations, all brought together by the horses.

Fonti had two more bouts of colic in Febuary, the last time he had a high fever as well. I'm still waiting for the results of a blood test that was taken, but probably the cause of his misery is sand. Apparantly he eats sand when he's out in his paddock, which has over time accumulated in his stomach. The last two weeks he's been fine, eating well and looking happier. He's back in work at the moment, but he's not allowed outside in his paddock before we can find a solution for the sandeating. If the bloodwork shows that he has some mineral deficency or the like, then hopefully he'll stop eating sand after he gets what he needs, if not then I don't know how to solve it. If anybody's been in touch with this problem before, I'll be grateful for any tips or info on the subject!
Lagt inn av Anne i Hannover kl. 20:54