Fonti's leg is looking better now, but today when I walked him he seemed a little down and had glassy eyes. Later in the evening I got a call that he was not looking good, he was rolling, wandering in his box and off his feed. Since I need about 40 min to get to the stable, someone else walked him for me and the vet was on the way. By the time I got there he was looking better, even wanting to eat a little. The vet said that he probably got a light gas colic from the weather change (it went from below freezing to almost spring-like temeratures in one night).

After having gotten some Buscopan (= Butylscopolamine) to prevent cramps and a painkiller I was to lunge him 10 min to speed the uptake of the drugs (which was a new concept to me). Since Fonti had more than the normal amount of intestinal sounds, he has to fast for the next 24 hours. I found a muzzle for him to wear, but with some effort on his part he still managed to eat his straw, so I had to spend some time clearing his stall of (almost) all the straw. 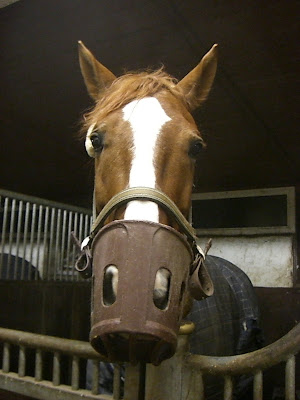 The look of disbelief - how am I supposed to eat now? 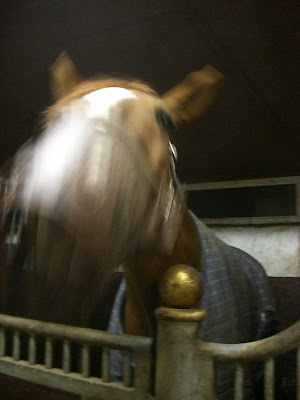 Now I'm back home from the stable, but wide awake (it's almost 1 a.m. German time), so I guess I can catch up on my studying until I get sleepy...
Lagt inn av Anne i Hannover kl. 00:51