I've decided to take after a friend and write my blogposts in English! As it turns out, she's right about Norwegian not being an international language (but just you wait...).

Anyway, a short introduction to any new and/or non-Norwegian readers: I'm currently studying veterinary medicine in Hannover, Germany, which I've been doing since October 2008. Last September I did an out-of-character impulse buy - after having gotten an offer I couldn't refuse, I'm now the owner of my very own dressage Wunder-horse!

Fonti is a Westfalian-bred chestnut gelding by Fürst Piccolo ( - Fidermark) out of Rubina ( - Rubinstein - Weltmeyer), born 2003 but insisting on behaving like a 3-year old most of the time.
Standing 1,80 m (17.7 hands) he's on the large side, but thankfully came equipped with a quite compact build and sense of compassion (i.e. he doesn't try to throw me off).

If you scroll down you'll se plenty of pictures of him, but here's another one just because: 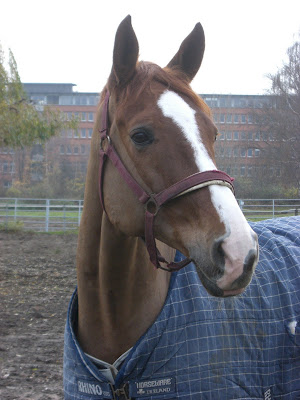 This blog is supposed to be about my life here in Germany, but most of the time I end up writing about the horse (although I try not to make them the one and same - even horse people need a life away from the stables...).

But this post WILL be about the horse! Because yesterday we had our first training since before Chrismas. I have been at home in Norway over the holidays, and so Fonti's been exercised by the 'bereiter' (is there an English word for the German "Bereiter" (the new name is "Pferdewirt")?) employed by the riding club, who is also the man I bought Fonti from. So it's a win-win situation: I get to see my family and old friends, and the horse is being upgraded as I'm away! It's really a once in a lifetime opportunity to have your own horse to train with, the most qualified riders/instructors ready to help you and at the same time be able to go home on vacation without having to worry about the horse.

So yesterday I was just going to take it easy I thought, get back into the feel of things and have a nice, relaxed trainig session. But Fonti had other plans, which I understood as he speeded around at the end of a 20 meter rope (otherwise known as lungeing). Or as one of the other riders in the arena expressed it: Er ist heute sehr motivert! ("He's very motivated today!").
No kidding.

I almost always lunge him before getting on, not so much because he bucks or the like but because he's more relaxed and supple if he can warm-up on his own. I wait for him to "abschnauzen" (again I don't know the English word: the sound the horse makes when he exhales/blows through his nose, signalling relaxation. Snorting would be when they're tense/scared, right?), then I get on. As expected Fonti felt like a time-bomb for the first 20 min, looking at everything and checking if they're dangerous (which should be done from a distance of 5-7 meter according to the Horse Manual for Having Fun and Avoiding Work).
Still, it's difficult to get angry with him - first of all, he's an animal made for running who's been coped up in a 3x3 m box for most of the day, it's cold and we've shaved of his fur (you can almost see the neon sign in his brain blinking "Gotta keep moving!"), and if he can keep having fun after weeks of mainly indoor arena training then great! Once he's gotten rid of some excess energy he's usually very willing to work, and almost always a very postive horse to work with.

Our main issue yesterday was to get him to accept my left leg, not lean against it on the circle or run through the corners unbalanced withe the hindquarters to the inside. The frustrating thing is that deep down I know what he does, I know what I must do and still I let it slide untill someone points it out. Yesterday, well into the training and after som half-hearted attempt to push him from my inside leg into the outside rein, it took some yelling from bereiter J before I got to it and got it right. And after Fonti started bending correctly, the trot-canter-trot transitions we'd been working on were of course no longer a problem... Next time, no excuses, consistent riding from the start of the training!

Things to work on:
*Correct bending (duh!)
*Shoulders back, long legs, sit more to the right
*Round, uphill canter strides (don't hold him back!)
*Lead with the outside rein, don't hang on to the inside one
*He shouldn't balance himself on me hand/rein - must carry himself

Maybe if I write it here, I'll be able to remember it better. It's not really that difficult, it's doing it all at the same time that's killing me! 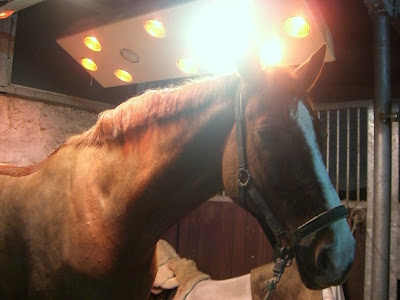 At least I wasn't the only one working hard! It's amazing how sleepy you can get standing under the solarium after a work out...