Here in Hannover spring has suddenly come, with rising temperatures and the snow and ice all gone. It's probably going to get colder before the "real" spring sets in, but at least we can enjoy a few days of sun and relative warmth.

Some pictures from my Christmas holiday at home, where I'm guessing it's still pretty much winter...
The first pictures are from my familys cabin in a low mountain region of Norway, the last from a deer couple that are partially living in our garden in the city(!). 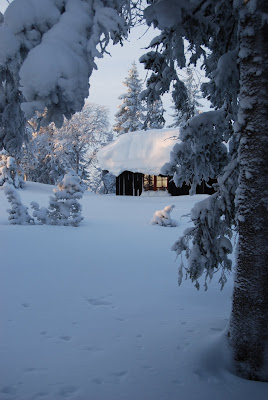 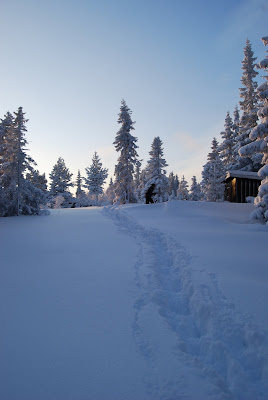 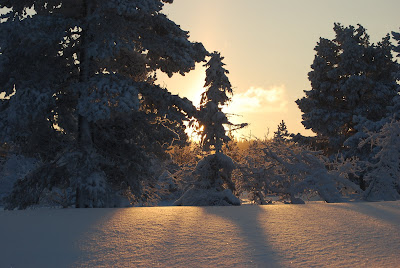 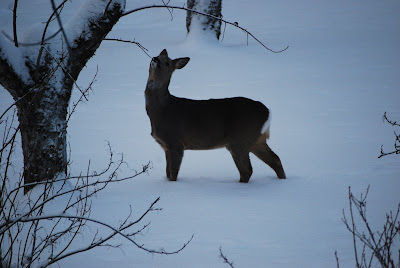 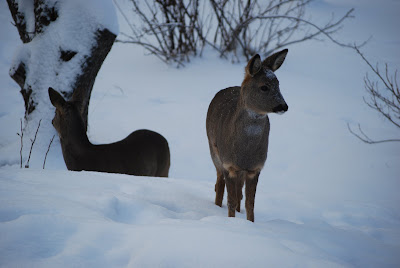 I spent most of the weekend helping out in the stable.
Yesterday I had a plan from the beginning of the training with Fonti (which istn't always the case...) and it really makes a difference. It always amazes me how much my own mental attitude towards the training can change the whole training session.

Fonti was bending much better around my left leg, and I also felt that I managed to sit better; I've developed a tendency to fall forward with my upper body, especially in the canter, but yesterday I kept my back pretty straight and my shoulders back. I also walk a bit tilted forward, so I'm trying to correct that as well (thanks Siri, I think I read that in one of your blogposts - about how you walk can be connected to how you sit on a horse).

At the same time Fonti sometimes became a bit fixed in the neck. When he can stretch his neck and relaxes in the warm-up phase, he usually swings through the whole body, but when I pick him up to start the real work, he sometimes stiffens in his body. I think this is partly because I tend to squeeze my thighs in the trot to sit still - which makes him speed up and makes it even harder to sit on him properly. So I often alternate between sitting and posting trot, to make him swing more through the back.
I also sometimes pull my hands back when he speeds up (if he could choose I think he would gallop all day long!) istead of controlling him with my seat, and I'm guessing that's the other reason he stiffens his neck/braces his back.

We also went for a little walk outside on both Saturday and Sunday, since the ice is finally gone. The stable is located in the middle of the city, so there's not much room for hacks, but we have some space around the stable/arena with riding paths and outdoor arenas (4 of them! The stable complex was built for the German cavalry, and I guess they were outdoor kind of people).
Fonti finds it very exiting to be outside, but if I lead him instead of riding him he follows me like a dog. Suddenly nothing scares him, even the tram passing close by doesn't concern him.
It's a standing joke in the stable that when Fonti and I am going to compete someday, bereiter J is going to have to run in front of Fonti so that we'll get round the arena without any spooking and/or unplanned stops...Good luck in the extended canter J!
Lagt inn av Anne i Hannover kl. 23:25